Since this article was published the Smoke ‘n Barrel container has moved from Manchester St to the Riccarton Sunday Market. They will continue to trade at Brew Academy.

earn that money. If you choose to spend this time with us, to have this experience, it should be amazing and special.”

You may not expect to hear such passionate talk coming from someone in a burger joint working out of a shipping container. Well you’d be right, because this

is no ordinary shipping container and this is most certainly not your average burger joint.

Smoke ‘n’ Barrel is the product of slow smoking guru Chris Geary, former fine dining chef Cory Blackburn and his wife Renee Blackburn. After working together in a café, Chris’ passion for smoked meats and Cory’s love of slow food has been gradually developing beyond Chris’ self-crafted mobile barrel smoker into an outdoor container restaurant and full scale catering company. Their very first job was Cory and Renee’s wedding.

“We’re perfectionists,” Cory tells me. “It’s just part of who we are. Our wedding food was really important to us.”

The wedding sealed the deal and Smoke ‘n’ Barrel was born. They started off small, a friend’s birthday, then a wedding and being Christchurch word of mouth spread about the remarkable products they were producing.

“And now as far as the catering side is concerned when the season comes we are booked out most weekends.” Says Cory. “We did it the way we felt was right, to treat every job like it’s really important. Go in and do the best we can.”

Renee agrees. “Our number one philosophy was every event gets 110% of us. We knew we could do an amazing job every single time without fault and it’s really paid dividends. We’re now into our third year of catering. We’re probably going to need a whole other team to do multiple events on the same day.” 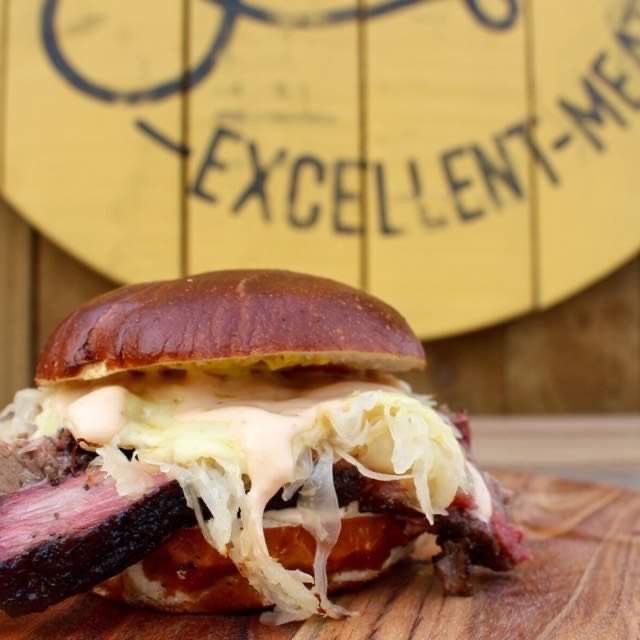 “Chris had the idea and always had a soft spot for a brick and mortar kind of place so this was the compromise that he came up with – we could do a shipping container.” Says Cory. “It came out of the Re:Start Mall concept. Since Covid we’ve transformed into doing takeaways three nights a week. A big learning curve because we weren’t really centred around packed food to take home. As a chef, I’m keen on food you eat this second, when it’s ready.”

The restaurant has outdoor seating with cute little roofs and heaters (I am assured there are Nana blankets available for chilly evenings), raised bed gardens and strings of lights overhead. The container houses a second smoker and at busy times they will both be smouldering away around the back.

THE CRAFT OF SMOKING

“The smoker was always Chris’ baby.” Cory says. “He wanted to do all the smoking and I was really into all the traditional methods because I like the idea of curing and preserving and really just taking your time with food. But the process is patience and care. All it is, effectively, is getting your smoker up to temperature using only the wood fire. We do it real simple, just plonk it in the smoker and let it go. You feed the fire for 12 hours or so and you sometimes have to add a bit of moisture. Then you wrap the meat and continue to cook it so it breaks down slowly without overcooking the outsides. It’s a labour of love.”

Chris built the original smoker himself from an old hot water cylinder, custom made a chimney and attached it all to a trailer. The meat is cooked in the smoker for up to 14 hours, with very close care and attention. Regularly seen around shows and festivals, its open fire provides warmth and light drawing people in.

“We’ve gone from Alexandra to Mapua in the South Island and everywhere in between. We just want to be able to move. People are like, ‘this is amazing!’ They all want to know what I season the meat with and I tell them it’s just salt and pepper. And a lot of attention to detail. It’s just simple, slow food and it makes such an impression.”

METHODS ADAPTED TO ENSURE WASTAGE IS KEPT TO A MINIMUM

“That’s my biggest pet peeve.” Cory tells me. “Even with the vegetables, someone put their effort into that. I don’t want to ruin this vegetable – we just like to take our time.”

“For me,” says Renee, “especially because it’s meat, something died to provide this meal and we’re going to treat it with a lot of respect. We just don’t want to waste an ounce of that.

Because you’re vacuum sealing it, you’re sealing in all of the flavour that you’ve worked so hard to put into it, all of the moisture, all of that tenderness and it lasts. It tastes just as good when you bring it back up to temperature.”

The sudden onset of Covid-19 left the team stunned. With weddings booked, The Food Show and festivals looming and a trip to the US for Cory and Renee all destined to be cancelled, they spent a couple of days mourning and reflecting on the immense consequences of it all.

“For me, personally,” says Renee, “there was this feeling of ‘we’re all in this together’ so I felt immediately connected to pretty much every human being on the planet. So I wasn’t so concerned for our own personal circumstances because everyone’s in the same position. It was so unique. So we just thought, right, let’s get the online store up and running. Let’s do right by people. Let’s refund deposits. Let’s be flexible.

“So we just kind of got on with it and realised how blessed we are. The subsidies have really kept us afloat, we’ve been able to keep our employee on. We’ve just plugged along and felt really thankful that we’re in New Zealand. Everyone had such a good attitude and now we’re here.”

Their online store features vacuum packs of smoked meat, affectionately called ‘meat bombs’. Dropped into a pot of simmering water for 10 minutes, they are ready to serve with pasta, in a burger or over nachos. After sampling a salmon meat bomb I have now been ruined for life! Painstakingly cured then gently smoked, it’s a whole other level of flavour that you just won’t find anywhere else.

Click here to get your hands on some meat bombs

THE EXCITEMENT OF WEDDINGS AND FUNCTIONS

Cory and Renee are passionate about their functions, especially weddings. Cory may spend up to a year talking to a bride and groom, often stockpiling 100+ emails. He and Renee will go foraging for greenery, garland the tables, sometimes adding twinkly lights through the buffet or grazing table, always trying to get things just perfect.

“I love it,” Renee says of working with her husband, “I really love it. I get to work with my best friend. It’s really fun. It’s only when we get so busy that we have to split up and take separate teams that I’m like – oh, it’s not as much fun. We’re the dream team!” she laughs.

COLLABORATION A KEY PART OF THEIR OPERATION

Friendships with suppliers and other small scale food businesses constantly pepper their conversation.

“The hospitality industry is full of great entrepreneurs,” says Renee, “but they’re also really creative and collaborative. It’s not so much about competition, but how we can work together. I think it’s really cool. We’re always meeting with new people. We’ve made so many great connections. It’s like an extended family”

Cory agrees. “I’d much rather it be that way. People aren’t going to eat our food every day, so I’ll say, ‘Have you tried these guys? They’re great.’ You’ve got to be genuine because people can easily see and taste it.”

“We’ve essentially brought two great things together under one roof at the Brew Academy premises. Nadine and Granville (Brew Academy’s owners) are awesome humans. They’re as passionate about what they do as we are, so it’s a great match,” says Renee.

Cory sources meat from Everybody’s Butchery, Christchurch’s oldest still operating butchery, chosen because of their interest in ethical animal treatment and dedication to sustainability. Greens come from Cultivate, a unique urban farm which also provides training and a route into the workforce for young people.

Click here to find out more about Everybody's Butchery

Akaroa Salmon, Cashmere Cuisine, Artisan Bakehouse and Good Honest are among their other suppliers as well as Totally Gluten Free. 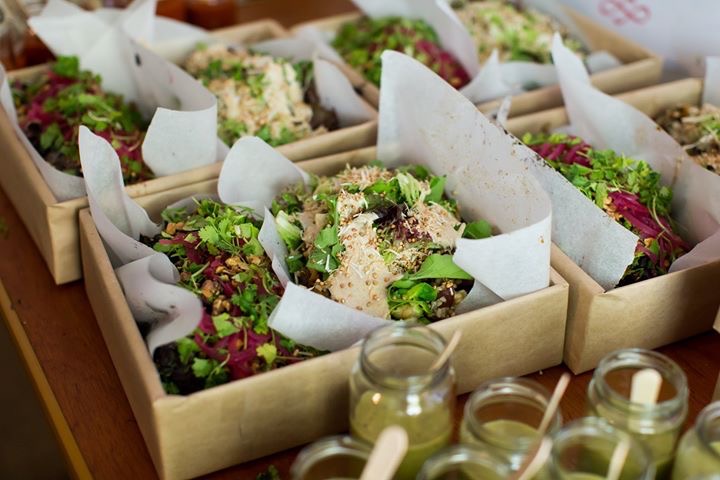 SPECIAL DIETARY REQUIREMENTS DON'T FAZE THEM IN THE SLIGHTEST

“I know this sounds weird because we’re Smoke ‘n’ Barrel,” says Renee, “but vegans and vegetarians are really easy. They’ll come in thinking, ‘well those salads look pretty good, I’ll just eat those.’ And I’ll say, ‘No, no, no, you’ve got smoked tofu, smoked eggplant, smoked mushroom…’ I have to swat away the meat eaters because it’s just as good. It’s not the sub-par offering that I think a lot of them are expecting. We’re almost all gluten free anyway and if it’s not, then there’s an option.”

Cory, originally from USA misses his family and the upheaval in his home country is cause for concern but he speaks with them regularly and remains philosophical.

“This is just the reality of what people all over the world are going through, even in their own country, even in this city. It’s a terrible situation and everybody is trying to navigate it at the same time. We are actually in the best place and I love that. You just keep looking ahead, making plans then seeing how those plans are changed by whatever’s happening. We always wanted to build something nimble and because of that we’re able to dance with the world right now and just keep going with it.”